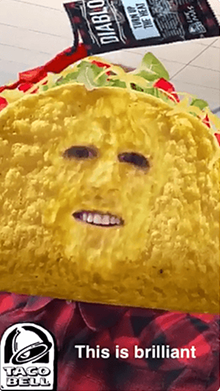 
Sponsored National Lens that turns Snapchatters into Taco Bell’s most iconic product. On average, Snapchatters spent 24 seconds with the Lens, generating nearly 12.5 years’ worth of play in a single day. Not only did Snapchatters interact with the Lens, but they also sent it widely to their friends. Together, Taco Bell and Snapchat made history, garnering 224 million views for the campaign — the most for any Snapchat Lens to date.