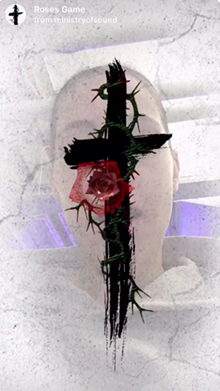 
Open your mouth to increase the rose size and match the outline. “Roses” is a song by Guyanese-American rapper Saint Jhn, originally released in 2016 and later included on his 2018 album Collection One. It was then remixed by Kazakh producer Imanbek and released as a single on September 13, 2019. The remix helped the song gain international recognition. Filter made by Lens That.